Copyright: © 2010 IJDDR, Japan Patel et al. This is an open access paper distributed under the copyright agreement with Serials Publication, which permits unrestricted use, distribution, and reproduction in any medium, provided the original work is properly cited.

A simple, accurate, sensitive, precise & reproducible UV spectroscopic method has been developed for the standardization of emodin in pure form and in indifferent extracts of medicinal plant. Emodin was estimated at 437 nm in methanol medium. Beer’s law was obeyed in the concentration range of 10- 100 μg/ml (r2= 0.973). The method was tested and validated for various parameters according to the ICH (International Conference on Harmonization) guidelines. Emodin content in extracts of various plant parts carried out at 3max. The detection and quantification limits were found to be0.41μg/ml and1.25μg/ml, respectively. The present study deals with stability of Emodin, studied for futher using spectral reagents like NaOMe,NaOAc,AlCl3 for their spectral shifts studied by UV-VIS spectroscopic and Infrared spectral method. Emodin content in extracts of various plant parts of Cassia auriculata L was found using same method. The results demonstrated that the procedure is accurate, precise and reproducible being simple, cheap and less time consuming, and hence can be suitably applied for the estimation of emodin in different dosage forms.

Antibiotic resitance from pathogenic microorganism renders drug ineffective and calls for improved designing and development of new drugs.Various medicinal plants contain 1,8- Dihydroxyanthraquinone and its derivatives that, have been isolated from various botanical families such as Rhamnaceae (buckthorn,cascara), liliaceae(aloe), polygonaceae(rhubarbs) and Caesalpiniaceae(senna)[1]. Emodin isolated from cassia family such as Cassia fistula, Cassia auriculata L , posses potent antimicrobial activity against skin infecting pathogenic organisms[2,3].Emodin is a biologically active, naturally occurring anthraquinone derivative[4]. From ancient times, herbal extracts of c. auriculata have been used in medical treatment[5]. Several scientific studies of its biological activity have been performed[5]. More recently, investigations are stressed towards spectral methods. The aim of the present study is to validate the potency of the molecule by UV-VIS and Infrared spectral methods. Various methods have been reported in the literature for the analysis of emodin[6] . The objective of the present study is to develop simple, precise, accurate and economic analytical method for the standardization of emodin. The developed analytical method is validated as per the ICH (International Conference on Harmonisation) guidelines[7]. Present study is carried out from various extracts of various parts of C. auriculata L along with biomarker like emodin.

Accurately weighed emodin (1mg) was, transferred to 10 ml volumetric flask and dissolved with methanol to get a standard solution of 100μg/ml.

1. Unhydrous Sodium acetate reagent was used as it is.

Collection of Plant materials and preparation of extracts

Cassia auriculata L was collected from Western Pune, Maharashtra, India. The taxonomic identification was carried out with the help of Flora of Botany Presidency and Flora of Maharashtra (Singh et al.2000) and herbaria were prepared by following standard methods. The specimen was authenticated at, Botanical survey of India, Maharashtra, India .Its voucher specimen number is BSI/WC/Tech/2009/95.

Air shade dried and pulverized parts of plant material was used. Extracts were prepared using exact weighed sample powder by refluxing in solvents such as acetone,ethanol,methanol. The solvents were recovered under reduced pressure .The dried extracts were used for the experiments.

Various concentrations (10-100 μg/ml) of standard solution were prepared using methanol. The absorbance was measured at 437nm against a solvent blank and from it validation parameters were calculated (Table 1).

Stability of absorbance is of major importance in Spectrophotometric measurements. The period over which absorbance at 437 nm of emodin in methanol remain stable was investigated using concentration range(10-100μg/ml). The absorbance were measured for above solutions at 15 min intervals for a period of 1 hour.

Emodin was verified with spectra shift reagents like NaOMe, NaOAc, AlCl3.The stock solution of emodin was used along with the above mentioned of reagents.The shifts in absorption with respect to λ max of emodin and comparitive spectral peak scans for the different spectral reagents were recorded. (fig 2).The analytical parameters such as Molar extinction coefficient, PH , conductivity are recorded under same set of condition (Table 3).

IR spectra were recorded in Nujol under same set of condition for the test solutions A,B,C,D over a range of 4000-400cm-1 to study the change in stretching and bending frequency of carbonyl and the hydroxyl group region of emodin(Table 4).

Weighed amounts of dried extracts were dissolved in known volume of methanol. The absorbance of the resultant solution was scanned in UV-VIS range (200-800nm) for maximum absorbance after enabling blank correction for methanol in the above region(Table 5).

The UV spectra of emodin was measured in the range 200-400 nm against methanol as blank solution (Fig. 1). The standard solution shows a broad band of absorption ranging from 200 - 400 nm was observed with λmax at at 437nm,299nm,260nm (Fig.1). From the UV spectra it is clarified that the 437 nm was the maximum UV absorption wavelength for emodin.

Linearity-The linearity range for emodin is found to be 10–100 μg/ml(r2 = 0.973) in methanol.(Table 1). The lower values of the standard error (SE) of slope and intercept (Table 1) indicates high precision of the proposed method.

Accuracy: The accuracy ranges from 10 to100 μg/ml (Table 2). The excellent mean percentage recovery values are close to 100 %.The standard deviation values (SD <1.0) indicate high accuracy of the analytical methods.

Detection limit: The detection limit of an individual analytical procedure is the lowest amount of analyte in a sample, which can be detected but not necessarily quantified as an exact value. The limit of detection of emodin by the proposed method was found to be 0.41μg/ml(Table 2).

Quantification Limit (LOQ): The quantification limit of an individual analytical procedure is the lowest amount of analyte in the sample which, can be quantitatively determined with suitable level of precision and accuracy. The limit of quantification of emodin by the proposed method was found to be 1.25μg/ml(Table 2).

Stability : Stability of absorbance is of major importance in Spectrophotometric measurements. The period over which absorbance value at 437nm of emodin in methanol remains stable is investigated using concentration range (10-100μg/ml). The absorbance values are measured at 15 min intervals over a period of 1 hour. Results reveals absorption stability(Table 2).

Infrared spectra of of emodin-A shows frequency at 3391 cm-1 that assigned to hydroxyl groups. Characteristic bands for anthraquinones are 1666 cm-1 and 1620 cm-1 assigned to the free carbonyl group and the conjugated carbonyl group stretching frequencies respectively. The observed frequency at 1475 cm-1 is assigned to a skeletal ring stretching frequency. The change in characteristic bands for B, C and D for hydroxyl as well as for carbonyl groups have been shifted to higher frequency indicate complex formation with the used reagents. (Fig.3). The change in pH and conductivity is also confirms the complex formation. (Table 4). 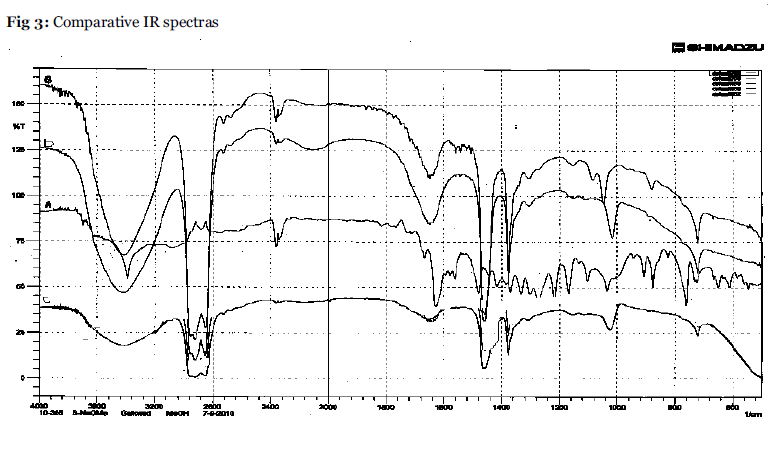 The proposed method stability, new approach to isolate and formulate content of emodin will be definitely helpful for the quantification of drug formulations and in various plant part extracts thus it will be useful for the validation study in plant parts as well as drugs.

The authors are thankful to the Principal, S.P.College and Head,Department of Chemistry, S.P.College, Pune-30 for providing experimentation facilities.