Catharanthus roseus or Vinca rosea belongs to family; Apocyanaceae which is a perennial, evergreen herb. It was native to the Island of Madagascar, and is now growing wildly in most warm regions of the world especially in Egypt [1,2]. C. roseus plant produces many pharmaceutically important alkaloids of which the bisindole alkaloids, vinblastine and vincristine (Figure 1) have antineoplastic properties. In addition, the plant also contains monoindole alkaloids including ajmalicine and serpentine which are antihypertensive in nature [3-9]. Vinblastine sulphate is used commercially for the treatment of neoplasma and is recommended for generalized Hodgkin's disease and resistant choiocarcenoma. The plant has been early used in treatment of diabetes, hypertension, tuberculosis, laryngitis, sore throat, dyspepsia, malaria, and to regulate menstruation [10, 11].Vinblastine and vincristine and vindesine and vinorelbine, semi synthetic derivatives of vinblastine, all work by inhibiting mitosis (cell division) in metaphase [12-15] .These alkaloids bind to tubulin, thus preventing the cell from making the spindles it needs to be able to move its chromosomes around as it divides (this is similar to the action of colchicine, but is different from the action of paclitaxel, which interferes with cell division by keeping the spindles from being broken down). These alkaloids also seem to interfere with cells' ability to synthesize DNA and RNA. The methods so far reported for the analysis of Vincristine and Vinblastine include their estimation using nonaqueous capillary electrophoresis [16], HPLC [17], HPLC/EIMS [18] showed low resolution owing to poor reproducibility. Others have been working on the isolation, purification and evaluation of antineoplastic alkaloids using chromatographic techniques. In this regard, Khaled et al.,[19] have developed several chromatographic techniques, viz charcoal column, VLC, HPLC, HPTLC and centrifugally accelerated radial chromatography (Chromatotrone). Paci et al., [20] further identified and quantified vinca alkaloids viz., vincristine and vinorelbine, vinblastine and vindesine using HPTLC in two different runs. All these procedures used earlier for the estimation of vincristine and vinblastine are lengthy and providing very less concentration of vincristine and vinblastine. With this back ground, we herein report a novel simple, specific and sensitive HPTLC method for the simultaneous quantification of vincristine and viblastine in the leaves of Catharanthus roseus. This method has been validated as per ICH guidelines [21]. Figure 1: The structures of vincristine and vinblastine

Standard vincristine and vinblastine were procured from Vinkem Labs Limited, Chennai, India. Dried samples of leaves of Catharanthus roseus (Family Apocyanaceae) were procured from a Delhi market, which were further authenticated by a Pharmacognosist and voucher specimens deposited in depository of Bioactive Natural Product laboratory, Department of Pharmacognosy, Jamia Hamdard. All other chemicals used were of analytical reagent grade.

Sample solutions were applied onto the plates with semiautomatic TLC sampler Linomat V (Camag, Muttenz, Switzerland) and were controlled by WinCATS software 1.4.4. Plates were developed in 20 x 10cm twin trough glass chamber (Camag, Muttenz, Switzerland). A TLC scanner III was used for scanning the TLC plates. Pre-coated silica gel aluminium plates 60F254 (E. Merck, Darmstadt, Germany) with thickness 0.2mm thickness were used for all determinations. The plates were pre-washed with methanol and activated at 60°C for 5minutes prior to chromatography. Six different aliquots (0.1, 0.2, 0.4, 0.8, 1.6, 3.2, 4.0 μL) of standard solution were applied on 20 x 10 cm TLC plates for the preparation of calibration curve. A constant application rate of 150 nL/s was employed with a bandwidth of 7mm.The slit dimension was kept at 6.0 x 0.45 mm and scanning speed of 20 mm/s was employed. Twenty mL of mobile phase consisted of toluene-methanol-diethylamine (8.75: 0.75: 0. 5 v/v/v) was used per plate. The optimized chamber saturation time for mobile phase was 15 min at room temperature (25 ± 2°C) at relative humidity of 60 % ± 5 RH. The plates were developed and scanned within 10 min using desitometric scanner III in the remission mode at 307nm for vincristine and 225nm for vinblastine respectively. The source of radiation was deuterium lamp emitting a continuous radiation between 200-400 nm. Evaluation was done by measuring peak areas with linear regression.

Weighed 50gm of Catharanthus roseus leaves and boiled it for 2 hrs. on an electric water bath. Powder the leaves and then mixed it sufficient quantity of alcoholic KOH and dried the powder in oven at 100°C. An accurately weighed quantity (2 g) of leaves were sonicated for 20 minutes in 4ml. of methanol separately. The solutions were filtered and collected in vials. Extracted the drug with 150ml. methanol in soxhlet apparatus for 6 hrs. Methanol extract was separated and shaken with successive three portions of 5ml.dilute sulphuric acid. Combined the acid extract and then filtered. Added excess of ammonia to the acid extract to precipitate the alkaloids. Filtered and dried precipitate was weighed. The precipitate was then dissolved in methanol (200mg/ml).

Six point calibration curve was constructed by plotting peak area against concentrations. Linearity was evaluated by applying each concentration (100, 200, 400, 1600, 3200, 4000 ng/spot) of vincristine and vinblastine in triplicates per sample and six such samples were evaluated (n = 3 × 6).

The precision of a method is the extent to which the individual test results of multiple injections of a series of standards agree. Repeatability was determined by six replicate applications and six times measurement of a standard solution at the analytical concentration of 400, 1600 and 3200 ng/spot of vincristine and vinblastine. The repeatability of sample application and measurement of peak area for active compound were expressed in terms of relative standard deviation (% RSD). Precision was obtained from % RSD value by repeating the assay six times on the same day for intra-day precision. Intermediate precision was assessed by the assay of three, six sample sets on different days (inter-day precision) and on different systems (inter-system precision). The intra-day, inter-day and inter-system variations for determination of vincristine and vinblastine were carried out at three different concentration levels 400, 1600 and 3200 ng/spot.

Robustness of the method

By introducing small changes in the mobile phase composition, the effects on the results were examined. Mobile phases having different compositions like toluene-methanol-diethylamine (8.75: 0.75: 0.5 v/v/v) were tried and chromatograms were run. The amount of mobile phase was varied in the range of ±5%. The plates were pre-washed by methanol and activated at 60 ± 5 for 5, 10, 12 min prior to chromatography. Robustness of the method was done at three different concentration levels 400, 1600 and 3200 ng/spot. Amount of mobile phase was varied and plates were developed in 8, 10 and 12 ml mobile phase. Time from spotting to chromatography and chromatography to scanning were also varied and RSD were determined and found to be less than 2 %.

Limit of Detection and Limit of Quantification

In order to estimate the limit of detection (LOD) and limit of quantitation (LOQ), blank solution (methanol) was spotted six times following the same method as explained above. The signal to noise ratio was determined. LOD was considered as 3:1 and LOQ as 10:1. LOD and LOQ were experimentally verified by diluting known concentrations of reference solution until the average responses were approximately three or ten times the standard deviation of the responses for six replicate determinations.

The specificity of the method was ascertained by analyzing standard drug and sample. 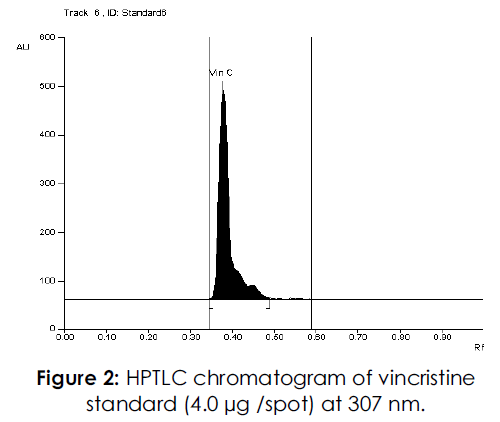 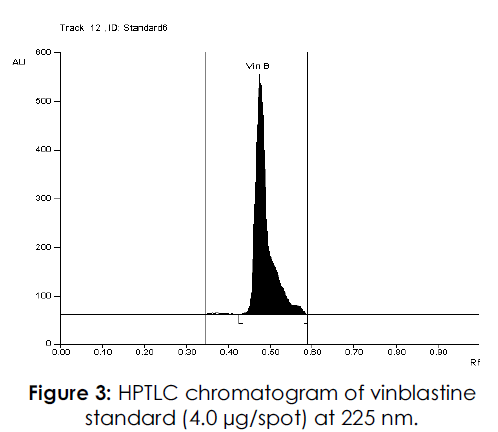 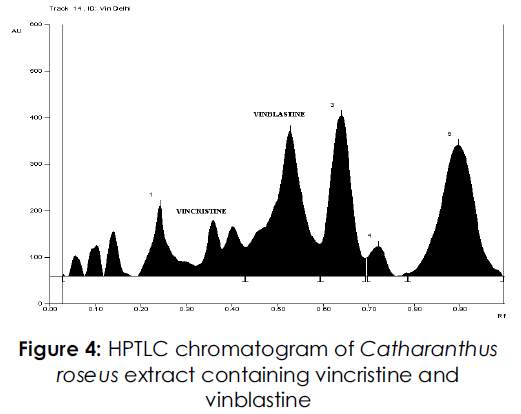 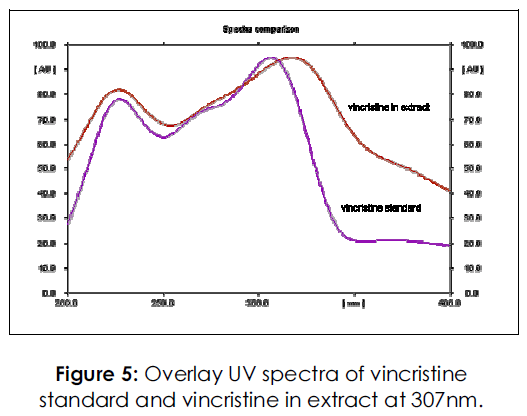 Figure 5: Overlay UV spectra of vincristine standard and vincristine in extract at 307nm. 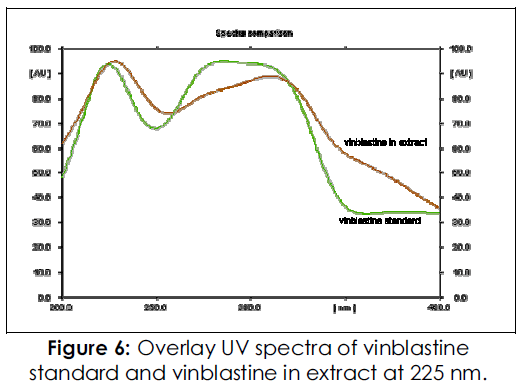 Figure 6: Overlay UV spectra of vinblastine standard and vinblastine in extract at 225 nm.

The pre-analyzed samples were spiked with 50, 100 and 150% of the standard solution and the mixtures were re-analyzed by the proposed method. The experiment was conducted six times. This was done to check the recovery of the drug at different levels in the formulations. Recovery study was carried out for the powder sample of Vinca rosea powder from a Delhi market.

For the development of mobile phase, different trials were made using many solvents in different proportions. When mobile phase consisting of toluene-methanol was used in the ratio of 8:2v/v two spots were observed at the Rf of 0.39 and 0.49 for vincristine and vinblastine respectively. But it was found that the resolution between the peaks was poor. In order to improve the resolution between the peaks a new mobile phase with the composition of toluene-methanol-diethylamine was used in the ratio of 8.75: 0.75: 0.5 v/v/v. This new mobile phase helped in achieving very compact spots at the Rf of 0.39 and 0.49 (Figures 2-4) for vincristine and vinblastine respectively with good resolution of more than one.

Table 1: Validation parameters of the proposed HPTLC method for estimation of Vincristine and Vinblastine

Precision data on the intra-day, inter-day and inter-system variation for three different concentration levels are summarized in Table 2. The low % RSD indicated the method is precise for the analysis.

Table 2: Intermediate precision data of proposed HPTLC method of a) Vincristine and b) Vinblastine

Robustness of the method

The effect of deliberate changes in the composition of mobile phase were studied as % RSD and depicted in the Table 3. Low % RSD indicates the method is robust.

Table 3: Robustness data of proposed HPTLC method of a) Vincristine and b) Vinblastine

Limit of Detection and Limit of Quantitation

The specificity of the newly proposed method was ascertained by superimposing the spectrum of both standard and sample and confirmed for its purity.

The accuracy studies were done for the method as recovery studies and the amount of the drug recovered was calculated on the basis of assay. The results of the recovery study were depicted in Table 4.

Table 4: Accuracy as recovery data of proposed HPTLC method of a) Vincristine b) Vinblastine.

For the analysis samples were spotted in triplicate on TLC plate, vincristine has Rf of 0.39 and vinblastine has Rf of 0.49 respectively. It was found that no interference is there in samples with immediate impurities and resolution between the peaks found good.