In the present study, ethanol extract of Amaranthus spinosus root was investigated for protective activity in CCl4 induced nephrotoxicity in male albino rat by histological assessment. CCl4 induced intoxicated rats were treated with 150, 300 and 450 mg/kg body wt. dose of ethanol extracts of A. spinosus in 15 days’ experimental schedule. The results revealed the deleterious histopathological alterations in kidney associated with glomerular and tubular degenerations in CCl4 intoxicated rat. Treatment of A. spinosus roots especially at 450 mg dose protects the kidney by improving disrupted metabolisms and antioxidant defense against CCl4 induced oxidative damage in 15 days’ protective experimental schedule. The findings support the therapeutic use of A. spinosus in ailments caused by oxidative and altered metabolisms.

Oxidative stress in cells and tissues result from the increased generation of free radicals or reactive oxygen species (ROS) [1,2]. Free radicals are produced in cells by cellular metabolism and by exogenous agents that induce numerous pathological complications [3-5]. Carbon tetrachloride (CCl4), a commonly used hepatotoxin in experimental models to induce oxidative stress. It is known to induce free radicals in liver and kidney and cause cellular damage [6-8]. The kidneys are responsible for elimination of unmodified drugs and metabolites. The certain metabolites accumulated in the kidney induce nephrotoxicity. It reportedly gets distributed at higher concentrations in the kidney leading to renal damage [9-11]. It shows a high affinity to the cortex which contains cytochrome P-450 predominantly [12,13]. The ingredients with antioxidant activity that acts as a free radical scavenger have a great potential to protect oxidative damage.

The reported hepatoprotective, antioxidative, antidiabetic activity of the root extract of A. spinosus prompted us to investigate protective efficacy of ethanolic root extracts of this plant in CCl4 induced oxidative damage in kidney of male albino rat through histological assessment.

Plant material and preparation of extracts

The fresh root of A. spinosus were obtained from the rural area of the Karad (Dist. Satara, MH, India) and were properly identified. The roots were washed, shed dried and powdered mechanically with standard method. The root powder was extracted with ethanol. The dissolved extracts were filtered through Whatman filter paper (No.1). Supernatants of each extracts were evaporated at 60°C to dryness. After evaporation extracts were collected and stored at 4°C.

To study the effects of ethanolic root extracts of A. spinosus on kidney different doses viz; 150, 300 and 450 mg/kg body wt. were used.

Male albino rats, Rattus norvegicus (Wistar strain) weighing 180- 220 g were used for the experiments. The rats were acclimatized under standard laboratory condition and were fed with standard pellet diet (Amrit feeds, Sangli, Maharashtra, India). Animals were randomly allocated into six groups of six each as per various treatments given as follows:

a) Group I: Normal rats without any treatment.

g) At the end of experimental period, all the animals were sacrificed and tissues were taken for histopathological studies.

The kidney tissues were dissected out immediately after sacrifice animal and processed for histological assessment. Tissues were fixed in CAF and processed for paraffin sectioning as per routine micro technique. The specimens were washed and dehydrated in ascending grades of alcohol. Then cleared and embedded in paraffin. The paraffin sections of 5 mm thickness were cut and further processed and stained with hematoxylin-eosin. The sections were observed under light microscope for histopathological alterations in kidney.

Several studies have showed that plants possessing free radical scavenging properties could be playing an important role in protection of oxidative damages in different organs such as liver, kidney, brain; caused by environmental and chemical toxicants through metabolic activation to highly reactive substances such as free radicals. In the present study, A. spinosus roots extracts in ethanol was tested for protective efficacy against CCl4 induced kidney damage in male albino rat.

The histological observation of the kidney of normal rat revealed the normal cortex and medulla region. It showed normal glomeruli (g) with Bowman’s capsule (bc). Endothelial cells were normal. The proximal tubules (pt) with distinct lumina filled with anatomizing brush border and distal tubules (dt) was normal with clear lumina. The stromal and interstitial tissues can be differentiated. Administration of 3.0 ml CCl4/kg body wt per day for 15 days resulted marked deleterious histological changes. It showed significant glomerular and tubular degenerations. Glomerular congestion has been observed with disintegrated Bowman’s capsules. Vacuolar and degenerative changes were also evident in endothelial lining of glomerular tuft and in epithelial lining of renal tubules. Swollen proximal tubules and dilated Bowman’s capsule was observed. Swollen collecting dusts, distinct intertubular connective tissue and thickening of collecting tubules are indicator of constant irritation (Figure 1) [23]. 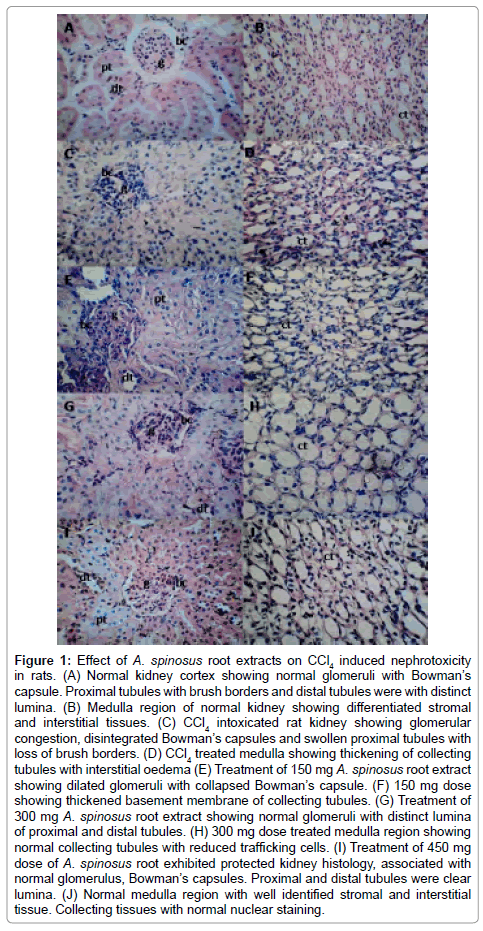 For the protective experimental schedule three doses 150, 300 and 450 mg/kg body wt. were tested. These doses (PO) were initiated simultaneously with the CCl4 administration. Treatment of 150 mg/kg body wt. dose given for 15 days resulted in collapsed lumina. Bowman’s capsule was disintegrated. Luminas of proximal and distal tubules were not differentiated due to loss of brush border of proximal tubules. Basement membranes of tubules was thickened. Administration of 300 mg/kg body wt. dose showed normal glomerulus. Distinct lumina of proximal and distal tubules. Collecting tubules were observed with reduced trafficking cells. Treatment of 450 mg/kg body wt. dose of ethanol extracts of A. spinosus root protected normal morphology of the kidney and showed normal architecture of the kidney. It showed normal glomerulus, cortex and medulla. It seems to be related with the increased dose. It is associated with normal proximal tubules with distinct brush borders, distal tubules and collecting tubules. The collecting tubules were normal with reduced trafficking cells. Connecting tissue with normal nuclear staining. These structural improvements were also observed with the tissues treated with 300 mg dose but were comparatively in reduced form.

The observed nephroprotective effect of A. spinosus roots honey might have been due to the presence of phenolic and flavonoidal contents. The active ingredients contents in A. spinosus roots in this dose only can control the oxidation. The active ingredients can control the oxidation and peroxidation process of lipids, resulting in reduction of tissue damage and help to continue the blood flow in the kidney and improvement of kidney functionality [24-26].

The results indicated that ethanolic extract of A. spinosus root at 450 mg dose protects the kidney from the histological alterations caused by oxidative damage; by improving disrupted metabolisms and antioxidant defense against CCl4 induced oxidative damage in 15 days’ protective experimental schedule. The findings support the therapeutic use of A. spinosus in ailments caused by oxidative and altered metabolisms.