Marine Halophyte: An Inviolated and Promising Source of Novel Lead Compounds against Deadly Diseases like Dengue and Breast Cancer

The present study was started with an intention to unveil the potentials of marine halophyte Salicornia europaea abundant in south east coast of Tamilnadu. To study the metabolite, profile the shade dried biomass of the halophyte was extracted with methanol and ethyl acetate and the fractions showed 29 and 32 lead molecules respectively. The drug targets against dengue virus protein NS5 and Estrogen Receptor (ER) protein for breast cancer were retrieved from PDB and docked with selective lead molecules of solvent fractions with the help of Hex 6.3. E-min/E-max values for the tested lead molecules against the corresponding drug targets were calculated. Significant results have been obtained and suggest that this unexploited halophyte could be exploited to harvest promising lead molecules.

Many infectious diseases are known to be treated with herbal remedies throughout the history of mankind. Even today, plant materials continue to play a major role as therapeutic remedies in many developing countries [1]. Marine halophytes are the specialized group of plants adopted for high saline conditions which include mangroves, seaweeds, sea grass, and blue green algae. They are also proven to have rich source of structurally diverse bioactive compounds with valuable pharmaceutical potential [2,3]. Breast cancer is the most common diagnosed malignancy in women worldwide (22%) and in India (18.5%) it ranks second to cervical cancer. The peak occurrence of breast cancer in developed countries is above the age of 50 whereas in India it is above the age of 40 (Population based cancer registries consolidated report (1990-96). India started National cancer registry program in 1981. Up to 2003 the program comprised of six population based cancer registry and one registry serving rural area covering the total population of 35.7 million (only 3.5% of the Indian total population) [4], and an increasing trend in incidence is reported from various registries of national cancer registry project and now India is a country with largest estimated number of breast cancer deaths worldwide (National cancer registry programme, Indian council of Medical Research, 2011. Dengue is caused by virus with potential fatal complications. The first clinical case report dates from 1789 of 1780 epidemic in Philadelphia is by Benjamin Rush, who coined the term “break bone fever”. Dengue viruses (DV) belong to family Flaviviridae and there are four serotypes of the virus referred to as DV-1, DV-2, DV-3 and DV-4. DV is a positive-stranded encapsulated RNA virus and is composed of three structural protein genes, which encode the nucleocapsid or core (C) protein, a membrane-associated (M) protein, an enveloped (E) glycoproteins and seven non-structural (NS) proteins. It is transmitted mainly by Aedes aegypti mosquito and also by Aedes albopictus. The WHO 2009 classification divides dengue fever into two groups: uncomplicated and severe though the 1997 WHO classification is still widely used. The key words “dengue/India” reflected 784 papers in PubMed.

Design and Methodology of the Study

The present study was carried out in the South east coastal environment of Thanjavur and pudhukottai district. The sampling spots are located on 10.20°N 79.24°E on the coast of the Bay of Bengal. The biomass (Figure 1) was collected carefully and brought to the laboratory for further phytochemical and insilico analysis. The fresh biomass was shade dried. About 8 grams of the dried material was extracted with methanol and ethyl acetate. The preliminary qualitative analysis for the phytochemicals present in the dried material was determined by Ref. [5]. The detailed nature of the type of phytoconstituents of individual extracts was determined by Gas Chromatography coupled with Mass Spectrometry (Model: Agilent 7890B) at the Sophisticated Analysis Instrumentation Facility (SAIF), Indian Institute of Technology, Madras. The instrument is enabled with the column called HP_5MS 5% Phenyl Methyl Silox- 60°C-325°C (325°C) and its dimension is 30 m × 250 μm × 0.25 μm. The injector temperature is 250°C and about 1 μL of the sample injected through auto sampler (G4513A). The flow rate of mobile phase (Helium Gas) is 1 mL/min and the scan range 40-700 m/z. Oven program 50°C for 2 min then ramp up to 300°C at 5°C/min, then 300°C hold for 5 min total run time 57 min. The GC-MS results of the extracts were illustrated (Figures 2 and 3). Selected protein target (2FOM) was downloaded from database Protein Data Bank (PDB: https://www.rcsb.org/pdb). (All water molecules were removed and on final stage hydrogen atoms were added to receptor molecule before docking. Totally 3 important phytocompounds available in the plant extract of Salicornia europaea were selected based on Lipinski rule of 5 described by Ref. [6]. Lipinski's rule of five also known as the Pfizer's rule of five or simply the Rule of five (RO5) is formulated to evaluate drug likeness or determine if a chemical compound with certain pharmacological or biological properties that would make it a likely orally active drug in humans. Structures of the phytochemicals were retrieved from PubChem saved as structure data format and *.pdb. All computational analysis was carried out on Windows 7 ultimate in HCL, Intel core 2 duo processors 4 GB RAM. The protein ligand interaction study was performed by Hex 6.3. 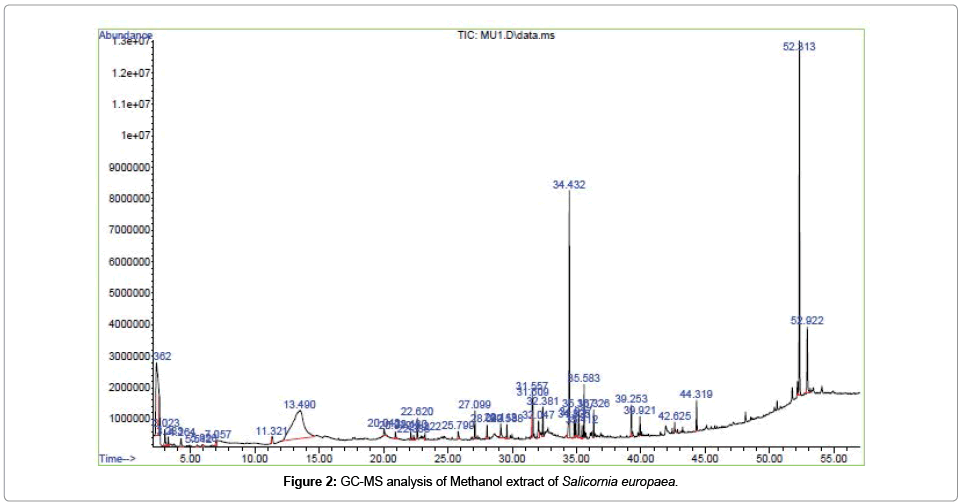 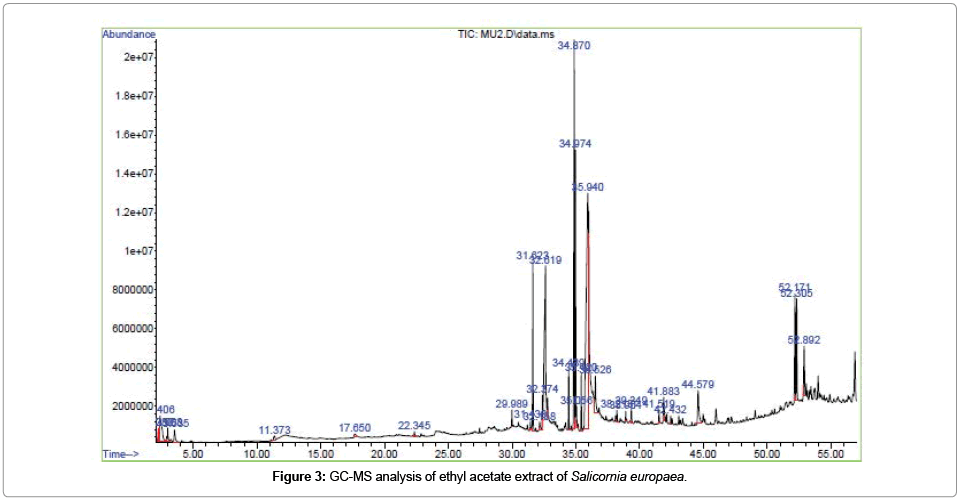 Edison [7] reported the Methanol and ethyl acetate extracts of Salicornia brachiata another halophyte member has showed significant radical scavenging activity and the free radicals are responsible for many physiological dysfunction and diseases [8,9]. Similarly, in the present study the methanol and ethyl acetate fractions of Salicornia europaea showed diversified nature of chemical leads with complex structures. The present study also confirms the presence of Flavonoids, tannins and saponins in ethyl acetate extract and Tannins, saponins and Coumarins in methanol extract could be the reason behind antioxidant properties of the members of this family [10]. Bibhu et al. [11] reported the antimicrobial nature of ethanolic extracts of Salicornia brachiata and the presence of two chromone derivatives namely 7-0-β-D-glucopyranosyl-6-methoxychromone and 7-Hydroxy-6- methoxychromone.

The following ligands were chosen to perform insilico docking studies with NS5 protease dengue virus receptor and Estrogen Receptor (ER) protein for breast cancer development. Ribavirin, Cidofovir and Viramidine were maintained as positive control for NS5 and Raloxifene, Toremifene and Toremifene analogs were maintained as positive control for ER protein docking studies. The results were tabulated (Table 1). Virupakshaiah [13], carried out docking studies of secondary metabolites like Gymnastatin G, Epoxyphomalin A, Conidiogenone C, Ustusorane E, Peribysin H, Chaetomugilin I and Aspergiolide B isolated from marine fungi for cancer study. The docking scores strongly revealed that the three potent compounds derived from marine halophyte has maximum docking score when compared to the standard positive controls used in the study. Thus the study confirms that organisms from marine environment showed diversified activities and contain unexploited metabolites.

The corresponding author takes this opportunity to thank The Management and The Principal of Ayya Nadar Janaki Ammal College (Autonomous), Sivakasi for providing extensive laboratory support with advanced instruments for phytochemical and insilico studies.