The present study was carried out using caspase 3, which is a human cervical cancer cell line protein. The current molecular docking shall stand useful for designing and development of future novel compound with higher inhibitory activity against caspase 3-HeLa protein. Further, these compounds can be validated further in wet lab to be nominated as potential drug candidates against HeLa proteins. The highest negative energy value obtained after docking among five compounds with caspase 3 was found to be coumarin (-378.3 KJ/mol), followed by camptothecin, epigallocatechin and quercetin with docking scores -285.3, -258.2 and -236 KJ/mol respectively. The least docking score was in docking of gallic acid with caspase3 and the scoring was -181.3 using Hex 8.0.0 docking software.

Cancer is one of the serious threats to humans, causing deaths worldwide in spite of substantial advances in research for its diagnosis and treatment. Almost 20 million new cases are predicted by the year 2020. Disturbingly, the proportion of new cases from the developing countries like India is expected to rise around 70%. The gauge of the problem of cancer in the Indian sub-continent is distressing [1]. Cervical cancer is the commonest cause of death among women in developing countries [2]. According to information center on HPV (human papilloma virus) and cancer in India, every year, 122,844 women are diagnosed with cervical cancer and mortality incidence from this disease is 67,477. In country like India with women population of 432.2 million aged between 15 years and older, are at risk of developing cancer, as it is the second most common cancer found in women aged 15-44 years [3]. Hence, there is a need for search of novel therapeutic drug with minimum side effects against human cervical cancer cell line which is also cost effective. Thus, researchers have turned towards natural products for synthesis of green drug for which, there is a need of knowledge on their interaction with target protein.

Various natural polyphenols have been studied to show cytotoxic effects on human cervical cancer cell lines, thus showcasing new perspectives in drug development against cervical cancer. The five natural compounds considered in this study are the polyphenols. These are a group of chemical substances from natural and herbal extracts which have gained great attention because of their negligible side effects and effective role in anticancer activity. Several studies were carried out to demonstrate the ability of these substances to target viral oncogenes and to inhibit the deregulation and signaling of gene expression of the host cells [4].

The quercetin belongs to the class of flavonoids as inclined to show anti-proliferation, induction of apoptosis against HeLa cell line in vitro and also induction of G2/M phase cell cycle arrest and mitochondrial apoptosis [5]. In vitro studies on HeLa cell line has proved that epigallocatechin, belonging to class of flavan-3-ols showed antiproliferation and induced-apoptosis also inhibited telomerase activity [6]. Gallic acid, belonging to the class of phenolic acids studied in vitro on HeLa cell line was proved to induce of apoptosis [7]. Camptothecin, a natural alkaloid was studied as an anticancer drug to have antiproliferative effect on HeLa cancer cells in low concentrations, through its nature of induction of apoptosis [8]. Coumarin, a naturally occurring substance found in many plants and also their derivatives have tended to induce apoptosis in HeLa cell lines by engaging both extrinsic and intrinsic pathway [9].

The objective of the current study is to analyse the domain and active sites of the caspase 3-hela cell line protein, to perform docking of the polyphenolic compounds and determine their active sites and compound docking so that their potentiality as a therapeutic agent against caspase 3 is assessed.

Bioinformatics tools: Soft wares like ChemSketch was used for chemical drawing and graphics, Hex 8.0.0; is an Interactive Molecular Graphics Program that calculates and displays possible docking modes of pairs of protein and DNA molecules. Hex can also analyze Protein- Ligand Docking, the ligand is assumed to be rigid, and it superposes several pairs of molecules based only on the knowledge of their 3D shapes [10]. The Spherical Polar Fourier (SPF) correlations were used to enhance the calculations and its one of the few docking programs has built in graphics for interpretation of the result [11].

The three dimensional structure of HeLa cell line protein Caspase-3 was found as a complex with V266F (Figures 1-6). This was retrieved from the PDB (Protein Data Bank) (https://www.rscb.org/pdb). The complexes bound to the receptor molecule, such as non-essential water molecules, including heteroatoms were removed from the target receptor molecule. Finally, hydrogen atoms were added to the target receptor molecule. The PDB was established in the year 1971, which is the worldwide archive of structural data of biological macromolecules, established by Brookhaven National Laboratories [12]. 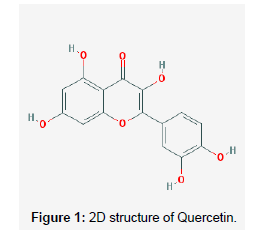 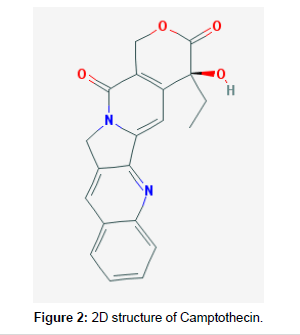 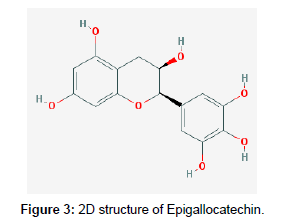 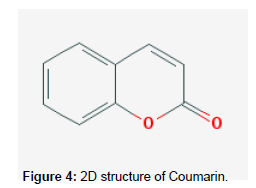 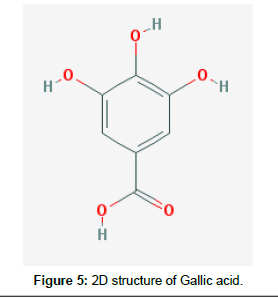 Five compounds namely Camptothecin, Quercetin, Epigallocatechin, Coumarin and Gallic acid were used for docking studies (Figures 1-5). The structure of these compounds were obtained from the Pubmed literature which shows inhibitory effects towards human cervical cancer cell line proteins [13]. The source for three dimensional structures was from PDB and further used for docking studies.

Docking of receptor with ligands

Bioinformatics is emerging as an important tool in the field of pharmaceutical and drug development with the prospective to significantly improvise the drugs and to check as to how they are originated, carried to the clinical trials and eventually released to the marketplace. This study was performed using HeLa cell line protein caspase-3 and five different compounds, the receptor was derived from Protein Data Bank (PDB) and was used as target for stimulating docking against the five different compounds. These results provide a strong consideration about interactions between the five compounds; camptothecin, quercetin, epigallocatechin, coumarin, gallic acid and caspase 3 which is the human cervical cancer cell line protein. By using Hex 8.0.0 software docking studies were performed and thus their binding model was explored. Further, it is well known that the recognition of binding site between the ligand and the receptor is the beginning point for drug discovery and also to determine the function of protein. In the present study, the active site of HeLa cell line protein caspase 3 was predicted with higher precision figure.

Also the active site of Caspase-3 is comprised of amino acid residues as follows:

The objective of this ligand-protein docking was to explore their predominant binding model of five different ligands with three dimensional structure of a HeLa cell line protein-caspase 3. The intermolecular flexible docking simulation was performed to explore the binding site of the five compounds-camptothecin, quercetin, epigallocatechin, coumarin, gallic acid with HeLa cell line protein Caspase 3. Energy values were calculated from the information obtained while docking the conformations of caspase 3 inhibitor complexes. The crucial interaction information concerning the binding pockets and their orientation of inhibitors in the target protein was obtained. The binding affinity was measured in terms of KJ/mol.

Figures 7: a, b and c) Docking of Quercetin with caspase 3 receptor.

Figures 8: a, b and c) Docking of Epigallocatechin with caspase 3 receptor. Figures 9: a, b and c) Docking of Camptothecin with caspase 3 receptor. Figures 10: a, b and c) Docking of Gallic acid with caspase 3 receptor.

Figures 11: a, b and c) Docking of Coumarin with caspase 3 receptor.

The molecular docking in the current study was concrete enough to discover the binding mechanism and interaction between the five different compounds which are the ligands and the HeLa cell line protein Caspase 3. The results obtained in this study shall be useful for future drug designing and development of novel compounds with higher inhibitory activity against several types of cancer. However, it is necessary to validate these compounds in wet lab studies for establishing them as potential novel candidates.

Authors would like to thank St. Aloysius College (Autonomous), Kotekar Post, Madoor, Beeri, Mangalore-575 022, Karnataka for the technical support and Mangalore University for their encouragement.