Zolpidem tartrate is a nonbenzodiazepine hypnotic drug, an agonist of GABA receptors. The present work was aimed to formulate and evaluate the mouth dissolving films of Zolpidem tartrate. Films of Zolpidem were formulated to enhance absorption of drug, which provide quick onset of action of drug. The mouth dissolving films were prepared by solvent casting method using gelatin as a film forming agent. Gelatin is a hydrophilic polymer, easily soluble in water, and has excellent carrier capacity for delivering the drug. Drug and excipients compatibility study was evaluated by FTIR study. In the present study, propylene glycol and tween-80 was used as plasticizer and surfactant respectively. Sucrose, aspartame, flavours, citric acid and menthol were used for taste masking of bitter taste of Zolpidem tartrate. The FTIR studies revealed that no chemical interaction present between excipients and drug. The results of Film evaluation parameters were match with expected criteria. All the formulation films have good mechanical strength, thickness (0.81mm), 99% drug uniformity and pH of film resemble with the pH of saliva. In less than 30 seconds film start to dissolve and in less than 5 min 100 % drug release.

Route of drug administration is one of the common problems associated with the elderly and pediatric patients, including dysphasia and difficulty in swallowing of tablet and capsule in many medical conditions, like stroke, Parkinson’s, AIDS, thyroidectomy, head and neck radiation therapy and neurological disorders [1]. Fast dissolving films recently have acquired great importance in the pharmaceutical industry due to their unique properties and specific advantages like no need of water for disintegration, accurate dosing, and rapid onset of action, ease of transportability, ease of handling, pleasant taste and improved patient compliance [2].

Film delivery system consist of a very thin oral strip, which is simply placed on the patient’s tongue, instantly film is wetted by saliva; then film rapidly dissolves releasing the medication; this results in quick onset of action [3, 4].

It can also improved solubility, stability, biological half life and bioavailability enhancement of drug [5].

Zolpidem is preferentially use for the short term treatment of insomnia. It comes under Class I drug in BCS classification system, pKa value is 6.2, onset of action is within 15 minutes, half life is 2-3 hours, rate of absorption is more in empty stomach and have 70% oral bioavailability [6]. It has low solubility in water but is easily soluble in aqueous buffer solution (pH 6.8), HCL, and H2SO4 [7, 8]. Adult’s dose is 10 mg/day and for geriatric 5mg daily dose before meal [9].

An approach has been taken to formulate and evaluate the mouth dissolving films of Zolpidem tartrate for fast dissolution and absorption of drug, which will produce rapid onset of action and enhance oral bioavailability. Gelatin film forming polymer was used because it is a water soluble polymer, quickly dissolves in saliva and within seconds, drug is start to release from matrix [10].

Gelatin in various concentrations was optimized as a primary film former and polyethylene glycol was used as a plasticizer. The composition formulas are given in Table 2. Distilled water was used as a vehicle for preparing various film compositions. Care was taken to avoid air entrapment. The film was casted by pouring the solution and spreading on a stainless steel plate. The film was air dried for 24 hours. The film was carefully removed from the plate, cut 2cm x 2cm size of film. Drug content was calculated as 5 mg per film of 4sq.cm.

Estimation of tartrate in bulk Drug [7]

Estimation of tartrate in drug was performed by the procedure give in USP.

Drug polymer compatibility studies were carried out by FTIR Spectrum study. The drug, individual excipients and mixture of drug and excipient were placed in the sample holding cavity of the instrument and the spectra were recorded by attinuated total reflectance on an FTIR spectrophotometer (Shimadzu IR Affinity -1).

Weight variation was studied by randomly select the films from each batch and checked for average weight and individual sample weight. Variance in weight and SD was calculated.

A film of size 4 cm2 was cut and put into 10ml of volumetric flask which containing pH 6.8 phosphate buffer solution; shake well to get a homogenous solution and filter. Solution was suitably diluted and the absorbance was measured at 238 nm under UV Spectrophotometer, and then calculated percent drug content in film.

The thickness of the film was measured using digital Vernier Calliper at five different places of the film and average was taken and SD was calculated.

Folding endurance was determined by repeatedly folding the film at same place till it break. The number of times the film could be folded at the same place without breaking/cracking gives value of folding endurance. Average was taken and SD was calculated.

In film, water or solvent may be present in residual form. Residual solvent was determined by taking initial weight (W1) of the film and then it is kept in hot air oven at 50°C for 20 min, let the film come to its normal temperature and then again weigh it. Calculate % loss on drying.

Dissolution test was carried out using the standard basket apparatus described in USP type I. The dissolution was carried out in 400 ml of pH 6.8 phosphate buffer maintained at 37±0.50C at 50 rpm. 4 ml aliquots of samples were taken at 30 sec time intervals up to film will completely dissolve and maintained in sink condition with same volume of fresh pH 6.8 phosphate buffer. Aliquots samples were then diluted with phosphate buffer solution and drug release is determined spectrophotometrically at λmax 238 nm.

The result of test resembles the criteria given in pharmacopeia; solution of sample was giving dark blue colour. This confirmed the Zolpidem is present in given drug sample.

The spectrum peaks of drug and excipients mixture that obtain were matched with the pure drug and individual peaks of excipients, and hence it was shown that polymer and excipients were compatible with drug, no any interaction was found. The spectrum of Zolpidem reveals the presence of major functional group in the structure of Zolpidem and peaks were supporting its identity. Similar peaks were observed in mixture sample. 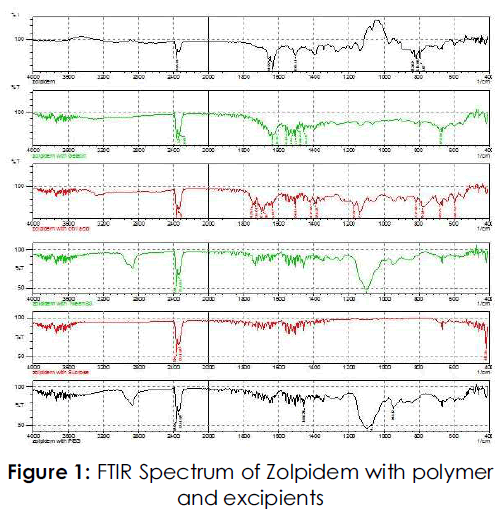 Figure 1: FTIR Spectrum of Zolpidem with polymer and excipients 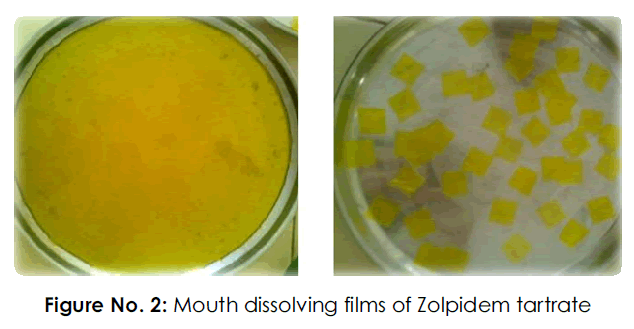 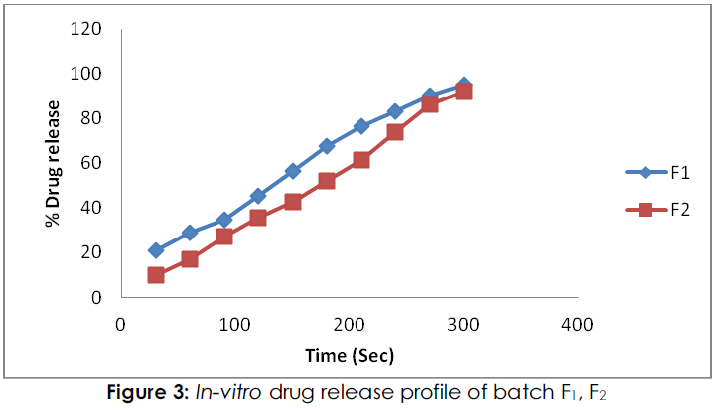 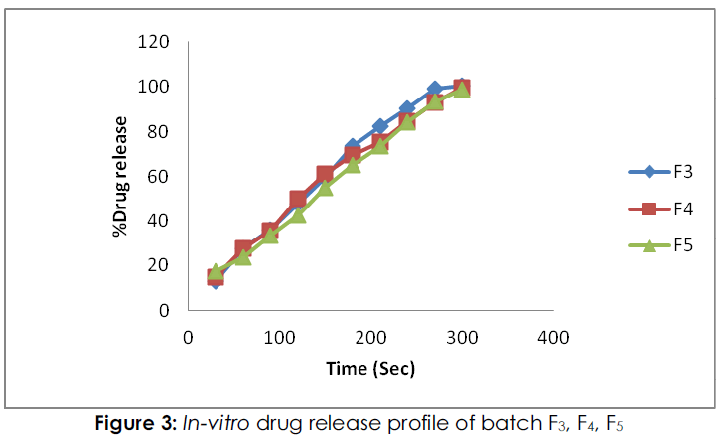 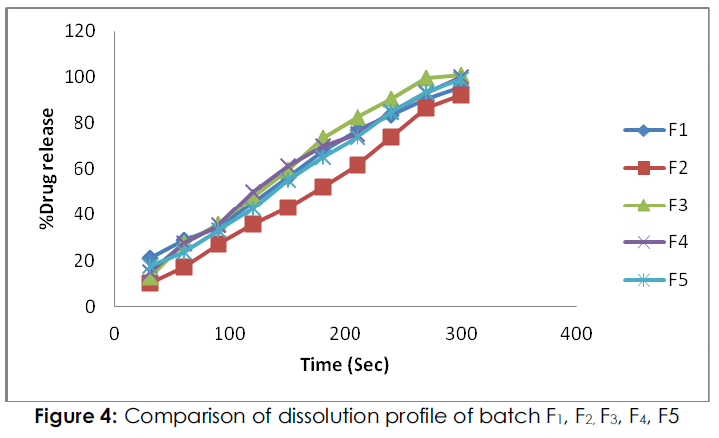 a. Study of mechanical properties

b. Palatability of films

Various composition formulation batches were prepared to optimized the palatable taste of films. Batch F1 were formulated without flavours and citric acid; the taste of films were unacceptable. Batch F4 and F5 were formulate to optimize the combination of sweeteners and citric acid. Aspartame was used in F4 batch; only aspartame with of citric acid could not sufficient for taste masking of drug and if increase the concentration it; aspartame was itself produced a bitter taste. In batch F5 sucrose was used; but sucrose was not improved the palatability of drug, effect of citric acid was more intent and film not have suitable taste.

Therefore, in Batch F2, and F3 included in further study, they were contained aspartame, sucrose, citric acid and flavours. Batch F2 were improve the palatability of drug because of combination of taste masking agents; but this films found to be stiff. In F3 batch complete taste masking was achieved; concentration of citric acid and sucrose nullifies the bitter taste of zolpidem. Hence F3 formulation was suitable for formulation of mouth dissolving film of zolpidem by gelatin polymer. This batch was used for the further validation study and result of evaluation parameter of selected formulation was show in tables.

All the prepared formulation films were observed semi transparent with uniformly colour distribution. The values of weight variation were in ranged of 46 to 54 mg. The thickness of films were observed (<1 mm), very thin film. The variation in weight and thickness were might be due to variation in quantity of ingredients. The pH of the films was found in range of 6.842 to 6.960, which means that pH of films was found to be near around the saliva pH. Difference in the pH-value might be due to polymer used for film forming as well as the drug. The folding endurance was measured manually, by folding the film repeatedly at a point till it broke. The value of it was found less than 260; hence films have good physical and mechanical properties.

All film formulation was assayed for drug content. Uniformity of drug content among the batches was observed 99%. The results indicate that the process employed to prepare mouth dissolving film was worked and produce uniform film with minimal content variations.

The in-vitro dissolution studies was performed using 400 ml of phosphate buffer (pH 6.8) and was maintained at 37 ± 0.5ºC. The results of test were given in the Table No. 5.

All values are mean of 4 readings ± standard deviation

All values are mean of 4 readings ± standard deviation

From the results of present work instimate, it was concluded that mouth dissolving film of Zolpidem tartrate were prepared by using 1% solution of gelatin as a film former. The flavours and sweeteners were masked the bitter taste of drug. Form the formulation study it was concluded that batch F3 has all the required specification; uniform drug content, excellent physical properties and less dissolution time. Hence, films of gelatin were suitable for the immediate drug delivery of Zolpidem tartrate, for the quick drug release and also it enhance the bioavailability of drug