In this review, we report the recent advances in synthetic compounds containing flavones moiety, covering the time span of the last decade. These structures have been investigated in the development of novel compounds with anticancer activity. Therefore, these compounds have been synthesized as target structures by many researchers and were evaluated for their biological activities.

Flavonoids are the polyphenolic phytochemicals of low molecular weight which are generally obtained from secondary metabolism of plants and are also synthesized in laboratory. These are known to play significant role in different biological processes. They elicit a wide array of properties useful for human health via interacting different cellular targets involved in critical cell signalling pathways in the body. Following the French Paradox Concept by the French Epidemiologists in the year 1980, significant escalation was observed towards flavonoid research. Consumption of red wine and a high saturated fat diet was found to be associated with comparatively lower cardiovascular mortality rate in Mediterranean population [1,2].

Flavonoids can be categorised into different classes which have been tabulated in Table 1. All the classes of flavonoids exhibit diverse pharmacological activities, but among them, flavones have been considerably explored. Numerous natural, semi-synthetic and synthetic derivatives of flavones have been synthesized and evaluated for pharmacological effects like antitumor and cytotoxic [3], anti-allergic, antioxidant [4], anti-inflammatory, antiestrogenic and antimicrobial [5]. Oxidative stress is known to be associated with a number of metabolic diseases. Recently, different studies are available in literature showing beneficial of flavones in numerous diseased conditions like cancer, diabetes, Alzheimer’s disease and several others. Flavopiridol, derived from synthetic process is commercially available for treatment of different ailments. Naturally, they can be traced in vegetables and fruits which we consume in our daily diet. Naturally occurring flavone moiety with a string of biological activities can serve as a lead for further synthesis of semi-synthetic and synthetic derivatives.

Flavone (C15H10O2) is a class of flavonoids, chemically named as 2-phenylchromen-4-one (2-phenyl-1-benzopyran-4-one). It comprises of three-ring skeleton, linked as C6-C3-C6, which are denoted as A, B, and C-rings, respectively (Figure 1). Functional groups, hydroxy, carbonyl, and conjugated double bond which are responsible for giving specific reactions. These colourless-to-yellow crystalline substances are soluble in water and ethanol. Yellow color solution is obtained upon their dissolution in alkali. These moderate-to-strong oxygen bases when solubilised in acids result in the formation of oxonium salts with pKa values in the range of 0.8 to 2.45 [6]. Flavones have a planar structure in which its C-O-C bond angle 120.9°. Bond length of C-O is 1.376 Å and its dihedral angle is around 179.2°. Flavone is also known by the names of 2-phenyl-4H-chromen-4-one; 2-phenyl-1- benzopyran-4-one. These can react in several ways, including reduction reactions [7], degradation in the presence of base [8], substitution [9,10], oxidation [11], condensation [12], rearrangement [13], reaction with organometallic reagents [14], addition [15-17]. Several synthetic methods have been developed and modified to obtain products of high yield, purity and of the desired quality. Flavones can be synthesized by various synthetic schemes like Bakere-Venkataraman rearrangement [18,19], Claisen-Schmidt condensation [20], Ionic Liquid Promoted synthesis [21], Vilsmeier-Haack reaction [22], Allan-Robinson [23], Wittig reaction, Fries rearrangement and modified Schotten-Baumann reaction. At present, synthesis of majority of the flavones is based on Baker-Venkataraman method. This method is based on the conversion of o-hydroxy acetophenone into phenolic ester, which then undergoes intramolecular Claisen condensation in the presence of a base to yield β-diketone. It is finally cyclized into flavones by an acid-catalyzed cyclodehydration (Scheme 1). Traditionally, flavones were synthesized via Baker-Venkataraman-rearrangement but these reactions involve the use of strong bases, acids, long reaction time which ultimately results in low yields. In this context, Sashidhara et al. reported an alternate route to synthesize medicinally important flavones. 2-Hydroxy chalcones were obtained via condensation between acetophenones and salicylaldehyde. On heating, they undergo oxidative cyclization in the presence of catalytic iodine. This leads to the generation of different flavones under green synthesis conditions (Scheme 2) [24]. Numerous patents published on this moiety are given in Table 2. 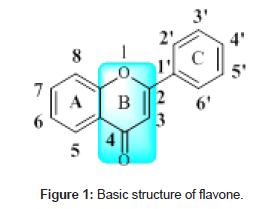 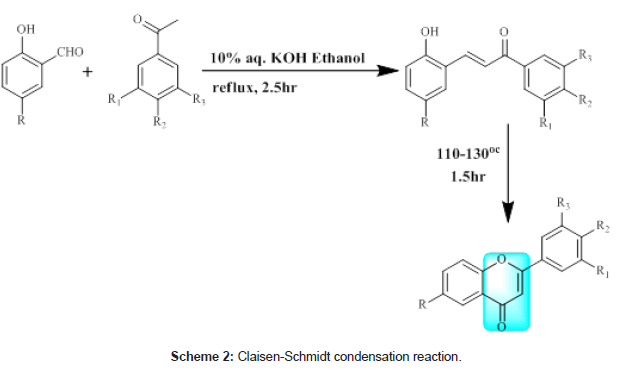 Flavones are considered as basic core units which are known to act against different targets to demonstrate a broad spectrum of pharmacological activities (Figure 2). Owing to such a broad range of pharmacological activities, medicinal chemists have always shown keen interest in this area and this has led to the discovery of numerous molecules targeting different ailments.

Cancer, uncontrolled cell division is one of the major causes for mortality and morbidity worldwide. It is characterized by cell proliferation, differentiation, angiogenesis, and loss of apoptosis. Currently available therapy for the treatment of this deadly disease suffers from the major drawback of associated side effects along with emergence of resistance to these drugs. Lack of selectivity towards cancerous cells is also one of the major issues. This results in the continuous engagement in the development of novel anticancer agents [25-46].

The flavones are important members of the flavonoid family found in fruits, vegetables and synthesized by different routes in the laboratory. They have received considerable interest sue to wide array of pharmacological activities. The main objective of this review is to highlight the significance of flavones moiety as templates fora large number of medicinal agents.