The role of clopidogrel in disruption of platelet aggregation is well known. The variability in clopidogrel response is a well-documented phenomenon and has been widely addressed through pharmacogenomics. CYP2C19 has been considered as genetic predictor of clopidogrel response. Owing to the inter-individual variations, CPIC (Clinical Pharmacogenetics Implementation Consortium) had issued guidelines in compliance with FDA. However, based on the genetic proofs clinical utility is more or less unsuccessful. The use of miRNAs to predict drug response and the introduction of miRNA-pharmacogenomics holds promise to bridge this gap and may improves the clinical utility by synergistically addressing the issue through genetic variations and miRNAs.

Atherosclerotic vascular disease has an inclination to stimulate arterial thrombosis, a sequence that has been characterized as an “atherothrombotic” process which stands to be the most common cause of death scenario worldwide. Playing the pivotal role, platelets first attach to the sub endothelial matrix initiated by endothelial injury caused by atherosclerotic plague and then aggregate to promote clot. Thus the fundamental target for therapies are the pathways involved in platelet activation viz., thromoboxane A2 formation, integrin αIIbβ3 and ADP-mediated signaling for which aspirin, clopidogrel and integrin αIIbβ3 agonists are widely used as anti-platelet agents. Among these clopidogrel is the most commonly cited model for illustration of pharmacogenomics phenomenon in clinical practice [1]. Clopidogrel is a class of thienopyridine antiplatelet medication, commonly known as Plavix and one of the largest marketed drugs for management of cerebrovascular and cardiovascular incidents [2]. In spite of its extensive use the limitations for its usage as regime has been acknowledged in the past. The shortcomings involve slow onset of action, solitary blockage of ADP-mediated signaling and variability in response in different patients accounting for poor inhibition of platelets [3]. The attributes of this variability have been largely confined to inter-individual genetic variations. The consequence of this response variability derived the subsequent research to characterize patients at elevated risk of thromboembolic conditions as non-responders [4] and those at high risk of bleeding as rapid or ultra-metabolizers [5]. In this pursuit, majority of research has focused on genetic alterations affecting the metabolic pathway of clopidogrel. A revisit to the past research on the key polymorphisms along with the metabolism pathway will aid in better understanding the variability in response to clopidogrel. This article provides an overview of the mechanism of clopidogrel metabolism, importance of existing biomarkers for response prediction and recent advances in pharmacogenomics to attend anti-platelet drug resistance.

Clopidogrel is absorbed in the gut by the help of ABCB1 gene and transported to liver for activation. As a pro-drug, clopidogrel requires activation, which is felicitated by two steps/reactions (Figure 1). Out of the total drug absorbed in the body, 85% is inactivated to clopidogrelcarboxylic acid by carboxylesterase 1 enzyme [6]. The residual amount is converted to 2-oxo-clopidogrel, which is again a crossroad for the conversion in to 2- oxo-clopidogrel-carboxylic acid via ester hydrolysis (inactive form) or thiol metabolite (active form). This metabolite hinders the adenosine diphosphate binding to the platelet P2Y12 receptors, irreversibly [7]. Finally this active metabolite is also hydrolyzed to an inactive carboxylic acid derivative by carboxylesterase enzymes [6]. 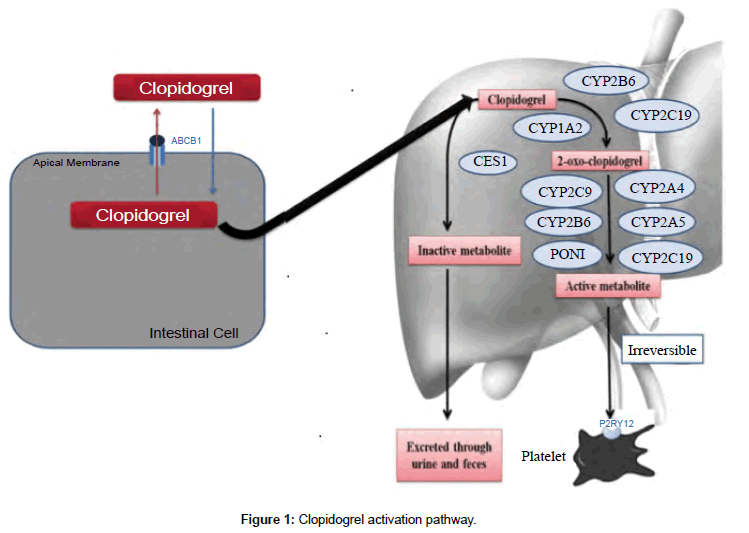 Clopidogrel, in its active thiol form inactivate ADP receptor P2Y12, which are expressed on the membrane of platelets (Figure 2). A combined action of both P2Y1 and P2Y12 is required for complete activation by ADP stimulation. P2Y12 is coupled to adenylyl cyclase and transits a sustained aggregation, which is pivotal in secretion of platelets induced by agonists [8-11]. 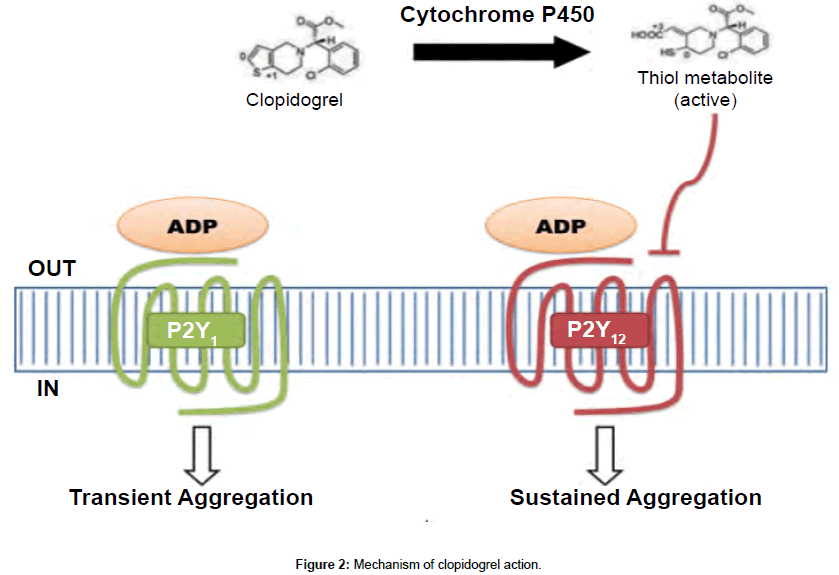 According to the documented reports, clopidogrel resistance ranges from 4% to 30% as opposed to 5% to 45% incidence for counterpart drug aspirin [12,13]. The variability of clopidogrel therapy has been demonstrated since mid-1990s, and is thought to be heterogeneous and dependent on clinical factors like diabetes, weight, dose reduction or withdrawal, drug-drug interactions or poor absorption or metabolism [14-16].

The postulated mechanisms in the variable response can be categorized into clinical, genetic and cellular factors [17]. Clinically, resistance to clopidogrel may be due to non-compliance of patients with the drug [18,19]. Also, the drugs similar to clopidogrel may be processed by cytochrome P450 in liver and can thus reduce its effectiveness. One of the common examples of this is omeprazole which is a proton pump inhibitor [20-23]. However, clinical data implies that the effect is not significant as opposed to the former notion [24]. Genetically, there has been massive research to characterize clopidogrel resistance based on genetic variability. CYP2C19 system is the utmost evidence based. This has been supported by a number of genome wide surveys and their meta-analysis. CYP2C19*2 and CYP2C19*3 alleles have been used previously to genetically determine clopidogrel resistance [25,26] based on the impact of these isoforms on active metabolite formation in liver. Besides CYP2C19*2 and CYP2C19*3 variations; ABCB1 gene has also been implicated to influence variable response [27-30]. Based on the ancestry, >50% of Asians, ~30% of Europeans and 40% of African carry these isoforms which result in failure to inhibit platelet aggregation and increase the risk to cardiovascular events [26,31,32]. The cellular based evidence suggests pre-clopidogrel response can predict post clopidogrel response, which has been evaluated by platelet function experiments [33-38]. This implies that a proportion of response variability is attributed to the platelet’s response to ADP rather than exclusively to clopidogrel.

The most promising facets of current medicine is undoubtedly the dawn of pharmacogenomics, which includes the study of individual genome and transcriptome to address the efficacy and adverse effects for a given drug. Clinical Pharmacogenetics Implementation Consortium (CPIC) has worked on this path and provided guidelines for prescription of drugs including clopidogrel based on the documented literature and recommendations of FDA [31,39]. In order to verify clinical validity (ability to forecast drug response) and clinical utility (enhancing clinical outcome) various drug-gene pairs have been tested [40]. Although clinical validity was demonstrated for the clopidogrel-CYP2C19 pair but there was failure in clinical utility [40].

Of the many landmark findings in the field of molecular research, discovery of miRNA (~22 nucleotide long noncoding RNA) (Figure 3) is the one, which has highlighted new mechanisms of gene regulation and opened a wider space for research in omics. Pharmacogenomics, on the other hand has worked over the last few decades to predict which patient will benefit most from the drugs and which will have adverse effects. Majority of this research has considered the role of single nucleotide polymorphisms in genes that are involved in pharmacokinetic or pharmacodynamic pathway of the drug. The known fact that most drugs need specific genes to be expressed for their activation; opens the horizon for miRNA research in this field. Studies highlighting the role of miRNAs on cytochrome P450 have begun, for example recently hsa-miR-29a-3p has been shown to modulate CYP2C19 in human liver [41] and miR-107 and miR-103 as regulators of CYP2C members [42]. These findings suggest there is a need to explore the synergistic impact of both miRNA and pharmacogenomics. The present scenario thus, demands elucidation of these regulatory molecules in adsorption, digestion, metabolism and excretion of drugs in general and clopidogrel in particular. For this reason, the term miRNA-pharmacogenomics coined by Rukov and Shormon, 2011 is definitely a new trend in molecular medicine and can possibly answer the drug efficacy and toxicity riddles, which are partially explained by genetic alterations alone [43]. 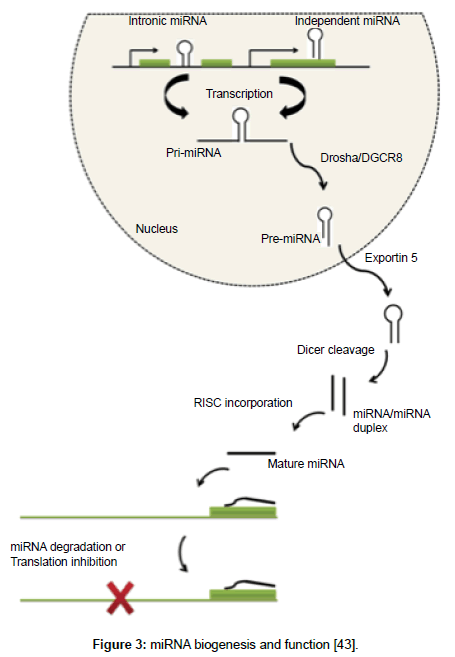 The role of clopidogrel in the inhibition of ADP stimulated P2Y12 receptor has been well characterized. The amount of data on the CYP2C19 polymorphisms and their ability to predicted clopidogrel drug response has achieved clinical validity. However to achieve clinical utility, miRNAs can synergistically comprehend genetic variations and predict drug response. The future avenues for miRNA-pharmacogenomics include interpretation of these regulatory mechanisms involved in adsorption, digestion, metabolism and excretion of drugs, which can most certainly at this point of time comprehend on the drug efficacy and toxicity.

We would like to thank Technology Information Forecasting and Assessment Council - Centre of Relevance and Excellence (TIFAC-CORE) in Pharmacogenomics at the School of Life Sciences, Government of India and Dr. TMA Pai Endowment Chair in Pharmacogenomics for technical and financial support.