Prevention of arterial thrombotic disorders is a very important socioeconomic challenge. The most convenient way of prevention could be by dietary means. In testing diets for antithrombotic effect, selection of pathologically relevant models of arterial thrombosis is of crucial importance. We demonstrated that the shear-induced platelet-rich thrombosis/thrombolysis in vitro/ex vivo test, Global Thrombosis test (GTT), provided the closest approximation to the pathology of arterial thrombogenesis. We have found that specified fruit and vegetable varieties have antithrombotic activity in animal experiments using shear-induced thrombosis/thrombolysis in vitro/ex vivo and laser-induced in vivo tests and that antithrombotic activity is due to inhibition of thrombosis and/or enhancement of thrombolysis. Here we present a pilot study in a small number of volunteers on diet containing potatoes, onions and apples which were tested antithrombotic with the Global Thrombosis Test. This study shows a trend of beneficial effect of such diet in humans and encourages the organization of a large scale, well controlled crossover study to establish the real benefit of such diet in preventing atherothrombotic diseases.

Prevention of arterial thrombotic disorders has even higher priority than treatment of the existing diseases. Compared to Western-style diets, clinical trials provided evidence for the reduced the risk of arterial thrombosis and death from coronary heart disease in Mediterranean, Vegetarian and Japanese-style diets. As to the mechanism of the antithrombotic effect, several nutrients and components of foods were speculated to inhibit platelet function in vitro [1-10].

The concept that long-term inappropriate (bad) diet can cause a prothrombotic state while appropriate (good) diet may prevent thrombotic disorders stems from the above epidemiologic studies. The reason of very few experimental studies in this field was the lack of a global test suitable to be used for screening diet components with possible experimental antithrombotic effect. According to Virchow’s triad, thrombus is formed by the interaction between blood, blood flow and endothelial cells. We have shown that thrombus formation induced by helium neon laser irradiation of an artery [11] was a pathologically relevant technique for testing antithrombotic effect in vivo. Looking for an in vitro (or ex vivo) test, the global thrombosis tests of Haemostatometry and Global Thrombosis Test-GTT), which measure platelet rich thrombus formation and lysis from a nonanticoagulated blood sample suited our purpose [12-16]. These tests are more relevant to pathology than those in common use measuring platelet reactivity from anticoagulated blood under static or low shear conditions. Results obtained by our selected in vitro tests (Haemostatometry, GTT) were consistent with the findings using the in vivo test of laser-induced arterial thrombosis test demonstrating that an experimental antithrombotic effect detected by these tests can predict an antithrombotic effect in humans [17].

The aim of the present pilot study was to assess our hypothesis that long-term intake of antithrombotic fruit and vegetable varieties could decrease thrombotic status in humans. Only three kinds of fruits and vegetables, potatoes, onions and apples, with and without antithrombotic activity were selected because of their harvest season in the present study.

Twelve healthy volunteers who had previously enrolled (8 male and 4 female; aged 35 to 67 years; 46 to 88 kg body weight) were enrolled again and grouped random into two groups (Antithrombotic group and Control group). Antithrombotic group took potato, onion and apple varieties with experimental antithrombotic activity and the Control group took the varieties of those without antithrombotic activity or less. Volunteers were asked to take the respective fruits and vegetables daily but eating habits, physical and other activities were not restricted. As individuals’ eating habits showed great variation, very large number of participating volunteers would have been needed to expect statistically significant findings. Therefore this is only a pilot study to test the assumption that antithrombotic varieties of fruits and vegetables selected by GTT and harvest time can exert antithrombotic effect in a limited number of healthy subjects.

Fruit and vegetable varieties with or without/less antithrombotic activity

Table 1: Characteristics of foods, measured by Haemostatometry or GTT (in vitro).

Non-thrombotic diets: Diets without the effect on thrombosis; Data cited from references 18-20 and revised.

Briefly, rat blood was mixed by inverting x3 with the same volume of saline (37°C) immediately after withdrawal 3.6 ml of such diluted blood with added 0.4 ml of juices from potato, onion and apple varieties was added to the GTT test tube and the antithrombotic/ thrombolytic activities were measured. Antithrombotic activity of juices prepared from potato, onion and apple varieties was measured after oral administration by the in vivo by helium neon laser-induced thrombosis test.

Intake procedure of the diets over 12 weeks

Both the Antithrombotic and Control groups, each of 4 males and 2 females consumed potatoes every day (mean 83 g potatoes per day), onions every day (mean 83 g onions per day) and apples with skin every day (mean 230 g per day). The study started in December and finished in March. Effects of fruits and vegetables on platelet reactivity (Occlusion Time; OT) and endogenous thrombolytic activity (Lysis Time; LT) were measured monthly with GTT. This project was approved by the Ethical Committee of Ishii Hospital and Kobe Gakuin University and was performed after informed consent from all volunteers.

Blood was collected from the antecubital vein in the morning before breakfast. The first 2 ml was used for different laboratory blood tests and the next withdrawn 3.0 ml non-anticoagulated blood samples were collected and transferred into GTT test tubes. The principle and procedure of GTT measurement has been described in detail elsewhere [14,15,21,22].

In Figures 1A and 1B illustrate the embodiment and the principle of this test. Four flat segments created along the inner wall of a conical plastic tube prevent the inserted round ceramic bearing balls to occlude the lumen. When blood is added to such tube, it flows through the four narrow gaps by the balls and exits in droplets into a reservoir tube. The latter is trans-illuminated by a light emitter coupled with a sensor, to generate signal whenever a drop of blood interrupts the light path. In essence, the instrument detects the time interval (d; sec) between consecutive blood drops. Blood flows by gravity at 37°C through the narrow gaps formed between the larger upper ball and the inner wall of the tube, and the resulting high shear stress (145 dyne/cm2) activates platelets. These activated platelets remain single, because the very short transit time and high shear prevent aggregation. However, in the space distal to the large ball bearing, the low shear and turbulent flow favor large platelet aggregate formation. Furthermore, in this space between the two balls, activated platelets generate thrombin, which propagate platelet aggregation and initiates coagulation of blood. Flow then carries these fibrin-stabilized platelet aggregates into the gaps by the lower and smaller ball, where they gradually occlude the gaps and arrest the flow. Increased or decreased OT indicates lowered or enhanced platelet reactivity, respectively. At the start, blood flow is rapid and hence (d) is small. Subsequently, the flow rate gradually decreases and hence (d) increases. When the actual (d) exceeds an arbitrarily set d ≥15 sec, the instrument displays “Occlusion Time (OT)”, which is before the complete occlusion and stop of flow. OT is calculated by the instrument in seconds from the detection of the first drop of blood until d ≥15 sec. Later, the flow is completely arrested. Eventually, due to thrombolysis, flow is restored as indicated by detection of the first blood drop, and this is an indication of lysis of thrombi. Following OT, for a set time (200 sec) blood drops were not detected, because during this time the flow stops and the formed thrombi were stabilized with fibrin. Lysis Time (LT) was calculated as LT=[the time (sec) of the first drop after OT]–OT. Prolonged or shortened LT indicates inhibited or enhanced endogenous thrombolysis, respectively (Figure 1C). 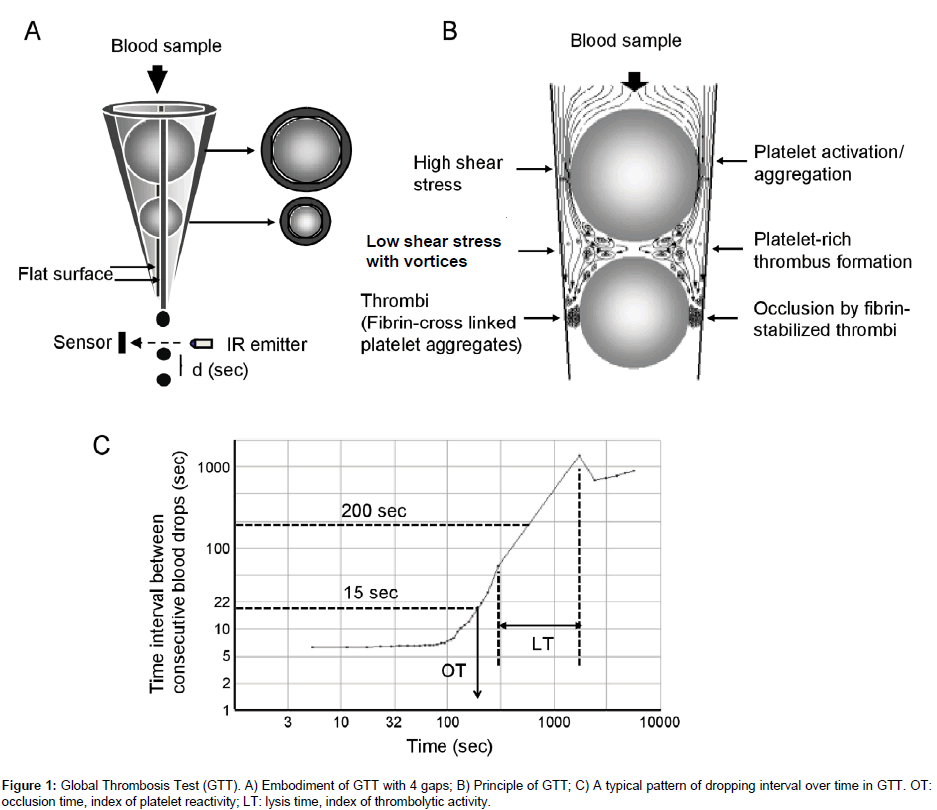 Due to low number of participant, trends rather than statistically significant findings were expected. Data from GTT were analysed by repeated ANOVA (General Linear Model), followed by the multiple comparison test (Student-Newman-Keuls). Values were expressed as means ± SEM. P<0.05 was considered as the limit of significance. Analyses were performed using Statistical Package Unistat 5.6 Light (London, UK).

GTT tests were performed just before the start of the diet intake, at 4, 8 and 12 weeks after the start. As the present study was performed from December until March for 12 weeks, only three kinds of raw fruits and vegetables were available. Results of GTT tests are shown in Figure 2. First, the data were analysed by unpaired Student t-test. Significant difference between two groups over time was not detected. However, OT values (platelet reactivity) and LT values (endogenous thrombolytic activity) have been demonstrated to be diverse even in the same cohorts [23]. In addition, as the number of fruits and vegetables, and the number of the volunteers were small in the present study, repeated ANOVA was employed for the analysis of significance (Figure 2). 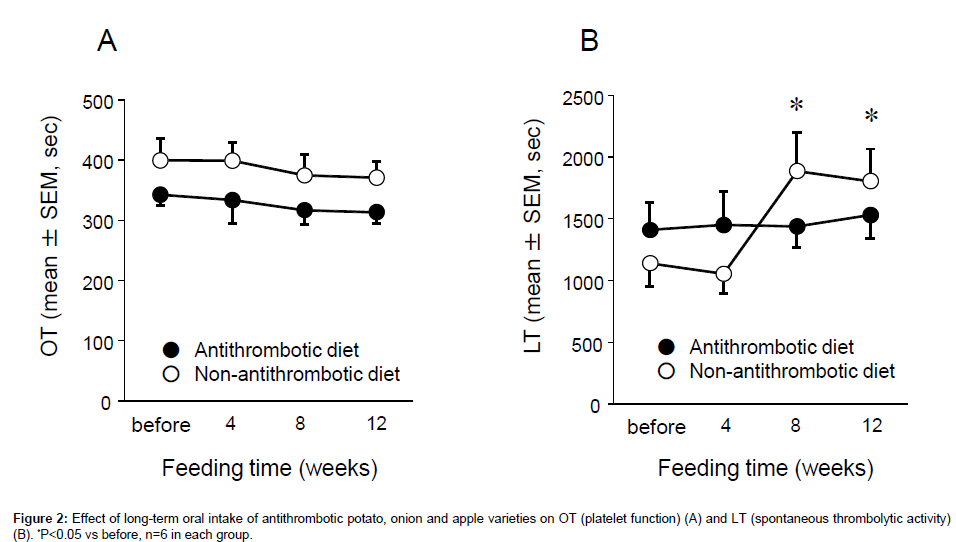 Figure 2: Effect of long-term oral intake of antithrombotic potato, onion and apple varieties on OT (platelet function) (A) and LT (spontaneous thrombolytic activity) (B). *P<0.05 vs before, n=6 in each group.

No significant difference in platelet reactivity was found over time in both groups. In contrast, endogenous thrombolytic activity significantly decreased over time in the Control group, while remained unchanged in the Antithrombotic group. These findings suggest that antithrombotic foods may have prevented the increase in thrombotic status as observed in the Control group. A series of our study to find antithrombotic fruit and vegetable varieties were targeting raw materials and raw antithrombotic materials were further examined in antithrombotic activity after heat treatment. Appearance and disappearance of the activity on thrombosis and thrombolysis after heat treatment are possible as observed in carrot varieties [24].

These findings suggest that long-term intake of various fruit and vegetable varieties of experimentally proven antithrombotic effect may be used as diet to reduce thrombotic risk in humans. The likely mechanism of the antithrombotic effect seems to be an enhanced endogenous thrombolytic activity rather than an antiplatelet effect.

The authors declare that there is no conflict of interest regarding the publication of this paper.