Copyright:© 2010 IJDDR, D Sagar Solanki et al. This is an open access paper distributed under the copyright agreement with Serials Publication, which permits unrestricted use, distribution, and reproduction in any medium, provided the original work is properly cited.

A simple liquid chromatographic method was developed and validated for determination of sumatriptan succinate (SUMA) in tablet dosage form. The analysis is performed at ambient temperature on a reversed-phase C18 column with detection at 232 nm. The mobile phase consisting of ACN : Water (18:82) and 0.05% v/v trifluro acetic acid was added in water at a constant flow rate of 1.0 ml/min. The method was validated for accuracy, precision, linearity and specificity. The linearity was found to be in the range of 10-50 ppm. The % recovery was found between the range of 98.0% to 102.0% of the labeled value. The proposed method was successfully applied for the routine quantitative analysis of tablets containing SUMA 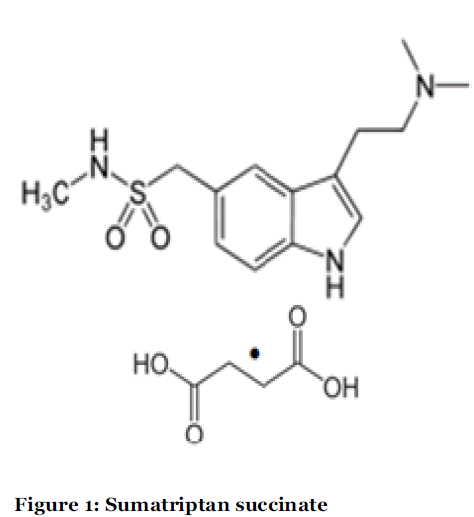 A literature survey regarding quantitative analysis of SUMA revealed that attempts were made to develop analytical methods for SUMA in combination with ergotamine tartrate by HPLC [5] sumatriptan by HPTLC[6] and visible spectrophotometry[7]. The aim of our investigation was to develop and validate an LC method for the determination of SUMA in pharmaceutical dosage forms.

In this study, reversed-phase high performance liquid chromatographic method has been developed for determination of Sumatriptan succinate and applied to commercial tablet dosage forms. The results obtained were validated according to the ICH guidelines.

The HPLC system consisted of a Young Lin 9101 vaccum degasser, a Young Lin 9001 quaternary pump and a Young Lin 9160 PDA detector (Seoul, South Korea). An YL-clarity chromatography data system was used to record and evaluate the data collected during and following chromatographic analysis. The chromatographic separation was achieved on a Purospher® 5μm, 250mm X 4.6mm. The mobile phase consisting of ACN : Water (18:82) and 0.05% v/v trifluro acetic acid was added in water, pumped at a constant flow rate of 1.0 ml/min. The eluent was monitored using PDA detector at a wavelength of 232 nm.

The column was maintained at room temperature and injection volume of 20μl was used. The mobile phase was filtered through 0.45μm Chrom Tech Nylon-66 filter to use.

Acetonitrile (ACN) and water [HPLC grade] were purchased from the Merck [INDIA].

The stock solutions of SUMA was prepared by dissolving accurately weighed 25 mg of the drug, transferred to 25 ml volumetric flask, dissolved and made up to the volume by using water (HPLC grade). Then appropriate dilutions were made to adjust the final concentration 10, 20, 30, 40, 50 ppm. The results of calibration curve are shown in table 1.

Table 1. Data from standard curve of SUMA by RPHPLC method.

For the estimation of drugs in Suminat 50 tablets, twenty tablets were accurately weighed, crushed and powdered in a glass mortar. The tablet powder equivalent to 50 mg SUMA was transferred accurately to a 50 ml volumetric flask and diluted to volume with water (HPLC grade). The solution was further diluted to obtain concentration of 40 ppm and the results are shown in table 2.

The developed methods were validated for parameters like accuracy, precision, linearity and range, LOD, LOQ, ruggedness and specificity etc, according to the ICH guidelines. The data for which are presented in the table 3.

Accuracy was determined by adding the three different quantities [Low, Medium, and High] of the standard sample to the sample solution containing the concentration of 10 μg/ml. The results are shown in table 3.

Repeatability was determined on 6 replicate of each concentration of the standard solution. The results are shown in table 3.

Precision was determined by performing Intra day and Inter day determination concentration on three different concentration as shown in table 3.

2.5.4 Limit of Detection and Limit of Quantification

The limit of Detection (LOD) and limit of Quantification (LOQ) were determined according to the ICH guidelines.

Where σ = standard deviation of y-intercepts of regression lines

S = the slope of the calibration curve

The result is shown in table 3.

The reversed-phase LC method described in this paper was developed for determination of SUMA in tablet dosage form. The method was validated according to ICH guidelines.