Curcumin (CUR) is considered of the main biological macromolecules, which is used in many foods and has an important role in the prevention of many diseases. A retrospective cohort study was performed, Sulfa drug (Sd) can cause perilous renal damages and there is no enough critical healing for Sd -induced renal damage. The work is aimed to induce nephrotoxicity through regulate the protective effects of curcumin (CUR) with Sulfa drug. Wistar Albino male rats have been administrated Sd to induce their Nephrotoxicity. "Malondialdehyde (MDA), glutathione (GSH) level and antioxidant enzyme activity" were measured in the renal tissue. Wherever, "urea, creatinine levels" were determined in the blood. Sulfa drug administration caused elevation of antioxidant enzyme activity, and levels of renal Malondialdehyde. CUR evidently was reduced the advancement of MDA levels, height antioxidant enzyme efficacy and maintained transformed renal morphology normally in administrated Sulfa drug animals.

The management of several drugs usually accompany renal damage. Sulfonamides are broadly administered for inflammatory-mediated human diseases [1]. Some examinations indicated reduction in renal function in sulfa-treated patients. Sulfa-induced renal damage has typically been introduced as interstitial nephritis, glomerulonephritis, nephritic syndrome and acute renal failure [2]. A Dihydropteroate synthetase enzyme that is responsible for folic acid (FA) production has been confirmed by structural activity relationship (SAR) of sulfanilamide. FA is very close of the ancestors of bacteria DNA and RNA [3]. In accordance to easily excretion of Sd in urine there are many harmful infections have been initiated in urinary tract. Sulfa drugs possess more fixation than re-absorption of water from the filtrate by the kidneys [4]. Furthermore, the accumulation of sulfa drugs leads to decrease in renal excretion and this remarkably increases the nephrotoxic risk of their action up to severe renal nephritis and necrosis [5]. Sulfa drug treatment for many days cause acute toxicity since the kidneys flop to evacuate the sulfa accurately which it can lead to renal failure [6]. Therapy of sulfa with high dose has been seen among of treating many diseases such as toxoplasmic encephalitis in HIV patients [7]. Meanwhile, sulfa nephropathy has become increasingly common [8]. CUR is a yellow-orange macromolecule which is exhibited in turmeric, with widespread uses as an additive in some foods like potato chips, curry, and mustard as well as important in several drugs and cosmetics [9-12]. It is considered as one of vital class of anticancer [13] and antioxidant agents [14]. CUR treatment was reported for preventing renal lesions of diabetic rats [15] and protected from renal cell line oxidative [16,17]. Furthermore, curcumin has been attenuated nephrotoxicity that caused via cisplatin [18]. From retrospective cohort study that has been performed. The main goal of this work is to inspect the protective effects for CUR on induced renal toxicity which is produced by sulfanilamide experimentally. Figure 1 displays the chemical structures of curcumin and sulfa drug. 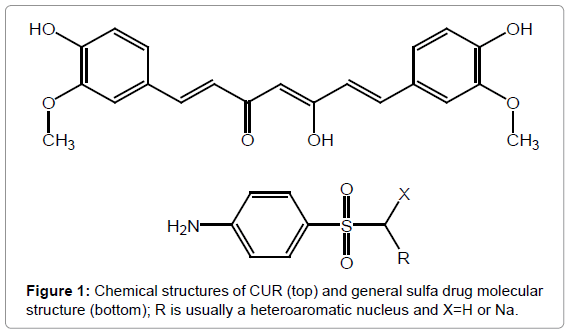 Sulfa drug and CUR were obtained from Sigma Aldrich. Curcumin was taken orally after solubilize in corn oil. 380 ± 40 g weight Wistar Albino male rats were cast off in an experiment. Albino rats were kept under Appropriate conditions "temperature, humidity-controlled, light-cycled quarters" and haphazardly divided into five groups. The study pro-tocol was approved by Animal house of the National Research Center.

Male rats have been injected by ketamine to anesthetized, after 24 h receiving Sd. Some biochemical parameters were measured by taking blood samples from vena cava. A high dose of ketamine was sacrificed by all rats.

Finally, abdominal middle-line was incised then quickly kidneys were removed and washed with cold saline solution. One of the two kidneys was stored in formalin solution for the histopathological test and the second was stored at -80°C to evaluate its renal glutathione (GSH), activities of glutathione peroxidase (GSH-Px), malondialdehyde, superoxide dismutase (SOD) and catalase (CAT).

In "150 mM KCL in ice-cold tamponade 300 mg kidney tissue" was added containing to determine malondialdehyde which is referred to thiobarbituric acid that measured by spectrophotometer [23].

Spectrophotometric method was used to determine GSH, which is dependent on Allman's reagent [24]. Glutathione peroxidase activity was assessed via detecting oxidation of reduced NADPH at 340 nm [25]. Activity of CAT was measured through the initial rate of H2O2 disappearance at 245 nm [26]. In the meantime, SOD activity was assigned by superoxide anion that produced with xanthine and xanthine oxidase [27].

The method of Houghton has been employed to analyze every section of kidney sections as semi-quantitative, the lesion grades were ranged from zero to four [28].

Antioxidant enzymes like "SOD, CAT, peroxidation of lipid and GSH" which recognized as "MDA levels" were exaggerated by CUR. Moreover, it was found that the double impact via treating with sulphanilamide antioxidant enzyme activities were decreased meanwhile, MDA levels were increased compared with control. Furthermore, on treatment via CUR it was showing a remarkable accumulative for antioxidant enzymes activities and the level of GSH, but reducing the MDA level "p<0.05" as listed in Table 2. In the control group, Light microscope assessment was displayed standard morphology of renal parenchyma with well-defined glomeruli and of kidney tubules (Figure 2A). It was observed that after an animal injected by sulfanilamide there was the morphology of "tubular epithelial degeneration, cell desquamation and necrosis" was changed as showed in Figure 2B. Kidney of rate that treated with sulfanilamide showed debris in proximal tube cellular and cortical interstitial overcrowding. Meanwhile, it was noticed that cellular desquamation was inhibited and glomeruli kept a healthier morphology "grade of tubular necrosis: 0–2" when rats was injected by sulfanilamide and CUR as recorded in Figure 2C.

To inhibit renal injury that caused by sulfanilamide there are several drugs have been utilized like vitamin E, melatonin and so on [21]. Increasing of creatinine and plasma urea levels in these rats that administrated by sulfanilamide have been inhibited by treating this rats with curcumin, which decreases ischemia-reperfusion prompted an escalation in serum creatinine levels [28]. Moreover, sulfanilamide toxicity came from its metabolism in the liver and extrahepatic tissues and excreted by kidney as a soluble water form [29]. Whenever, administration of high dose of sulfanilamide leads to production of large amounts of metabolites, which increases the toxicity, leaving large amounts of unrestricted reactive metabolite that bind with cellular protein macromolecules covalently [30]. Furthermore, sulfanilamide has been attenuated nephrotoxicity which is referred to its reactive metabolite [31]. A fact of antioxidants stimulates the synthesis of GSH, which is a remark of sulfanilamide-induced renal injury prominent to tissue necrosis and ultimately to tissue dysfunction was disordered [32]. From literature survey, it was found GSH level plays an important rule to estimate GSH peroxidase and reductase, leads to inhibit Adriamycin treatment and decrease of defense mechanism for kidney antioxidant, increase free radical induced by kidney damage in nephrotoxicity [33]. Moreover, it was endorsed that lipid peroxidation may be a causative factor in the enhancement of renal toxicity. It is probable that the activity of curcumin in inhibiting the membrane damage is moderately associated with its capability to forage lipid peroxidation initiating agents [34]. Herein, we also observed that treatment of Albino rate with sulfanilamide alone has a remarkable increasing in Malondialdehyde levels in their renal tissue than control. In this work, consequences of clinical investigation displayed a vibrant prove of nephrotoxicity following the treatment by sulfanilamide in an overdose. A sever renal tubular necrosis was a strong relation to clinical change. These point of view concurrence with those of the past examination, explain renal histological change following the treatment by of overdose sulfanilamide [19]. It is clear that inhibition of nephrotoxicity that caused by sulfanilamide by administration curcumin to get rid of nitrogen mono and dioxide, singlet oxygen and superoxide radical [35- 38]. Finally, an impact of this investigation, curcumin administration has the reverse effect for treating sulfanilamide which causes decrease of endogenous antioxidant, which is confirmed by the abatement in SOD, CAT, and GSH-Px activity.

Therapeutic doses of SD administered to human are amongst 3-6 g/day. As a high dose of SD is managed for the chronic mode, it might lead to cell defensive mechanism to nonstop oxidative stress. Curcumin might be able to be managed as a supplementary agent in sulfa-treated patients. The proposed mechanism of sulfa-induced renal damage and the possible therapeutic effects of CUR are shown in Figure 3. 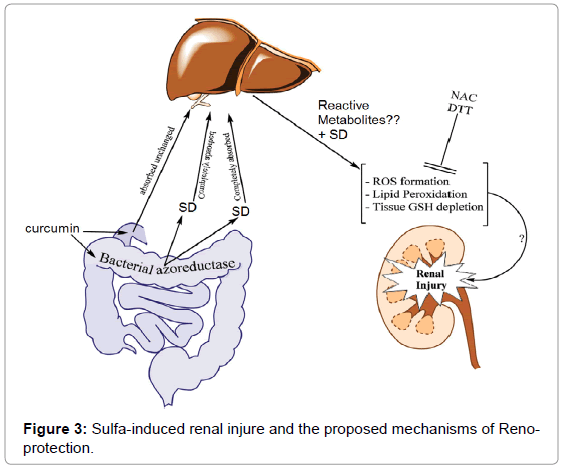 Figure 3: Sulfa-induced renal injure and the proposed mechanisms of Reno-protection.

From this perspective study, it has been included that curcumin might be haveing a potential hopeful specialist against tentatively instigated nephrotoxicity of sulfanilamide by means of its free radical- searching and antioxidant properties. Assist examinations are expected to show the effect of curcumin on sulfanilamide-initiated nephrotoxicity. Malondialdehyde (MDA), glutathione (GSH) level and antioxidant enzyme activity were measured in the renal tissue. Where, urea, creatinine levels were determined in the blood. Sulfa drug administration caused elevated antioxidant enzyme activity, and levels of renal Malondialdehyde. Sd markedly was reduced the elevation of MDA levels, elevation antioxidant enzyme activity and maintained altered renal morphology normally in rats administrated Sulfa drug.

Availability of Data and Materials

All materials and data are available in the manuscript.

Authors announce that there are no conflicts of interest.

Author approve that there is no funding for this work

The authors declare that this work was done by their names in this article and all liabilities pertaining to claims relating to the content of this article will be borne by them.

I would like to thank Division of Biochemistry Staff, Faculty of Applied Science, SA for their excellent technical assistance during the work.